Relic: Necklace with a miniature Double-Bladed Axe attached to it.

Attacks: Satomi has several combat Tactics that she is able to utilize her Martial Arts Skils in. She starts out with Hand-To-Hand Combat and when that doesn't work she is able to manifest her Ax. The main attack she is able to use her Ax in is striking the ground in front of the Noise and opening up a crack causing an Earthquake. There is a catch though, she can only use it a maximum of twice during the same battle because it zaps a lot of her strength when she uses it. Her Attacks are Earth and Steel based, with a bit of Wind Power. Currently, the attack she uses her Ax for is currently unnamed.

Satomi is a very friendly and outgoing young lady she is always willing to lend a helping hand and would do anything to protect her Friends and Family. Her strengths: Include reliablity, grace, determination, flexibility, and toughness. Her weaknesses include tendency to jump to unfound conclusions from time to time, is only an average student with problems in math. there are also times where she has trouble managing her money.

Satomi Tanizaki grew up in a Middle-Sized Town in Japan where she studied Martial Arts. She earned rank in Karate, Judo, and Okinawan Kobudo. She eventually earned Certification in Okinawan Kobudo for the following weapons: Bo, Sai, Tonfa, Nunchaku, and Aiku. She is currently studying the Nunti Spear. Her Gear was found in Okinawa when she was on a trip with her Karate School Group. Satomi has also earned the rank of Sho Dan or First Degree Black Belt in Shuri Ryu Karate. She is also ranked as an Ik Kyu in Judo.

Obtaining and Bonding with Labrys

As was briefly highlighted earlier, Satomi obtained her Labrys Gear when she was in Okinawa with a group from her Karate School. She was walking around and saw something glowing in the dirt. She took it upon herself to dig around the glowing item and eventually uncovered it completely. The item she found was a piece of what looked like an Axe Blade that had been buried for years. When she touched it, it transformed into a miniature Dual-Bladed Axe. She pulled out a Necklace Chain and touched it to the miniature dual-bladed ax, the necklace chain attached itself to it thanks to the magic that had bonded with Satomi. When she sings a beautiful Melody, her Mini Ax activates and she is encased in an armor with a main color of dark pink and a sub color of white. Her armed gear includes the giant Double Bladed Ax known as Labrys and is also of the same color, as seen in the Labrys Gear pic in the Gallery.

One day, Satomi was taking a stroll down the sidewalks of her hometown and several Noise attacked. In order to defend her Town, and innocent bystanders, she activated her Relic and summoned her Dual-bladed Ax. Several S.O.N.G agents from the represented division saw this and approaced Satomi. The group of Gear Users were amazed by how Satomi handled her Gear and invited her to join. She thought of it for a short time and accepted. She was then taken to S.O.N.G. Headquarters where she met Michiru and became fast friends with her. To this day, she is one of the top agents of S.O.N.G when it comes to taking out the various Noise that appear throughout Japan. 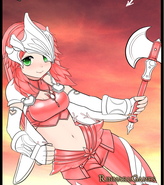 Satomi Tanizaki in her Labrys Gear.

Satomi Tanizaki in her School Uniform.

Satomi Tanizaki in all three appearances together in one picture.

Smaller version of the three forms of Satomi Tanizaki.
Add a photo to this gallery
Retrieved from "https://symphogear-fanon.fandom.com/wiki/Satomi_Tanizaki?oldid=5843"
Community content is available under CC-BY-SA unless otherwise noted.