Michiru Nagasawa is a Symphogear OC made By CureRuby24.

She was originally thought to not compatible with Relics however she forcefully bonded with one inorder to find her missing Dad who was kidnapped by noise when she was young. She's not good with people but that's because she doesn't want to drag people into her Quest for Revenge she also wants to meet the one that gave her the strength fight. She uses the Dyrnwyn gear It is red and pink and her Armed Gear is a Rapier.

Her mom died when her and her brother were born and was raised by her father, then 6 years later her father was kidnapped by Noise's on that day she sweared revenge on the noise and those that didn't help her.

In the present day after being denied to be tested as an Attuned she finds a relic in her dad's attic and forces it to bond with her because it was unwill bonded her transformation is unstable and imperfect and she can only perform short hit and run attacks on noise and then run to safety.

After a botched attack on some Alca-noise she is rescued by S.O.N.G's northen japan sector group and taken to their headquarters and drafted into them and tasked with finding a stolen Symphogear from India that has been spotted in the area.

She keeps her hair in twintails like her mom did, she has fair skin and beautiful pink coloured eyes also like her moms, she wears a bow her father gave her on the day he was taken. She tends to wear her school uniform most of the time.

Her Gear resembles that of old time knights it is adorned with several hearts all over she wears black spats along with red armour around that as her bond was forced she does not have much armour however she prefers fast strikes anyway and says this is perfect for her.

She appears to have super human abilities in order to survive using an unyeilding gear especially without the use of LINKER.She has trained her self in a few basic unarmed combat techniques. Like Hibiki and Maria, Michiru can enter a Berserk mode, this one more out of control and unpredictable as her gear is unyielding. 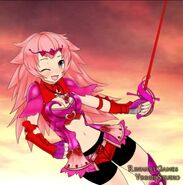 Michiru's Symphogear
Add a photo to this gallery
Retrieved from "https://symphogear-fanon.fandom.com/wiki/Michiru_Nagasawa?oldid=5826"
Community content is available under CC-BY-SA unless otherwise noted.